Have you ever said something you wished you could take back? Silly question. We all have. But what if we could stop the words before they tumbled out in the first place? That would be a win-win for everybody. Click & Tweet!

I remember taking my son, Steven, to an amusement park just before he began fourth grade. It was hot, the lines were long, and I began to feel queasy from being gyrated and jerked to sudden stops from 60 miles per hour. Feeling quite the martyr, I was just about to remind Steven how lucky he was to have a mother like me to bring him to an amusement park. But before the words escaped my mouth, the Holy Spirit gently stopped me. Was that what I really wanted to say? Would those words make Steven feel “lucky” or would they make him feel guilty, as though he owed me something?

Instead of saying my initial thought, I wrapped my arms around my precious young son and said, “Steven, I am so lucky to have a son like you that I can bring to an amusement park.”

With those words, a dimpled smile spread across his precious face, and I was thankful for the splash of the watery roller coaster that disguised the tears streaming down my face.

If I had spoken that first sentence, Steven would not have felt lucky to have a mom like me at all. He would have felt guilty and that he needed to pay me back for my “kindness.” However, the revised version made him feel special, treasured and loved.

Here’s a smidgen of what the Bible tells us about the power of holding our tongues.

There is a time for everything…”a time to be silent and a time to speak”  (Ecclesiastes 3:7 NIV).

“The words of the reckless pierce like swords, but the tongue of the wise brings healing” (Proverbs 12:18 NIV).

“Do not let any unwholesome talk come out of your mouths, but only what is helpful for building others up according to their needs, that it may benefit those who listen.” (Ephesians 4:29 NIV).

I had success with my words that day at the amusement park, but not every day has been a banner day. I have used my words to tear down instead of build up. I have failed many times. “The tongue is a fire, the very world of iniquity,” as James so aptly points out (James 3:6 nasb). It can only be tamed by the power of the Holy Spirit, prayer, and practice.

So let’s practice! The next time you get ready to say something to someone that will tear them down rather than build them up, zip it up. Then think of something positive to say to that person instead. You can do it. I know you can!

Heavenly Father, please keep guard over the door of my lips. I ask that the Holy Spirit convict me of careless words before they slip from my lips. Help me to think about how words would make me feel before I speak them to others. In Jesus’ name, Amen. 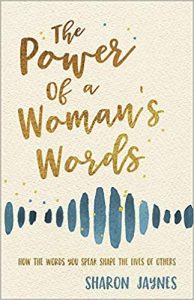 My best-selling book, The Power of a Woman’s Words: How the Words You Speak Shape the Lives of Others and Bible study guide are being re-released April 21st with twenty-percent new content, including a new chapter on the power of a woman’s words to her adult children…it’s complicated! Pre-order before April 21, 2020 and receive a free downloadable e-book of Enough: Silencing the Lies that Steal Your Confidence plus much more! Click here for details.