I’m sharing a devotion over at Proverbs 31 Ministries today. I wanted to share this with you too. Here’s what I want you to know: You are worth more!

As a little girl, I never felt I was worth very much.

I always felt I wasn’t pretty enough, smart enough or good enough. I sensed my parents tolerated me but certainly didn’t delight in me. And if your own parents couldn’t love you, then who could?

Then there was the definitive day in the eleventh grade that took my self-worth to an all-time low. I can still remember what I was wearing: lavender bell-bottom low-rise jeans, a bubble knit short-sleeve top, Dr. Scholl’s wooden sandals, and a blue bandanna tied around my head of long, oily hair that I hadn’t had time to wash that morning. This was acceptable attire when I was in high school, except for the days when a special awards or recognition assembly was held.

In homeroom that morning, the principal announced over the intercom that an unscheduled assembly would take place at 11 a.m. to recognize students being inducted into the National Honor Society. That’s when I understood why so many of my friends were dressed a notch above the norm. Their parents had received the secretive congratulatory call the night before and made sure their kids had washed their hair and left the frayed jeans in the drawer.

Some 400 teens found seats in the darkened auditorium. The principal made a speech of commendation from the podium and then said, “Will the following students come forward when your name is called to receive a certificate and a candle to be lit by last year’s inductees?”

The principal called each name, and I watched several of my friends walk across the immense stage. Then, to my horror and surprise, my name was called. Why didn’t my parents warn me, I thought. I look horrible — and I did.

When the houselights went up, I panned the back of the room where proud parents snapped pictures and pointed out their progeny to others standing on tiptoe to catch a glimpse. My parents were not among them — they never were.

I later discovered that my dad had received the call from the school the night before but forgot to tell my mom. Even though they both worked across the street from the school, they didn’t come to the ceremony. In my mind, their absence confirmed what I’d suspected for the past 17 years. I’m just not worth the trouble.

I didn’t care about the certificate or the principal’s accolades. What I really wanted to know was that I had value to the two people who mattered most.

Perhaps you’ve had painful experiences in the past that left you feeling worthless. Jesus wants you to know you have great value. He gave His life so that you would!

Jesus said, “Are not two sparrows sold for a penny?” Jesus asked His disciples. “Yet not one of them will fall to the ground outside your Father’s care. And even the very hairs of your head are all numbered. So don’t be afraid; you are worth more than many sparrows” (Matthew 10:29-31, emphasis added).

You are worth more than the money in your bank account.

You are worth more than the number of friends you have on Facebook.

You are worth more than the number of meetings and appointments on your calendar.

You are worth more than your successes or failures.

You are worth more than your level of education.

You are worth more than the price tags in your closet.

You are worth more than your accomplishments or lack of them.

You are worth more than many sparrows.

It took many years, but finally I took hold of Jesus’ words: You are worth more. That’s what Jesus wants you to know today.

Oh, Lord, help me to really get this. I’ve spent so much of my life feeling like I’m not good enough. Help me see that because of the finished work of Jesus on the cross and His Spirit in me, I am enough. Help me see I have great worth as a child of God and image-bearer of my Heavenly Father. In Jesus’ Name, Amen.

If you prayed that prayer with me today, leave a message that says, I am enough!

Do you ever feel that you’re not good enough, smart enough, or just not enough, period? If so, it’s time to silence the lies that steal your confidence and awaken the truth that you’re amazingly created and equipped by God. Today’s devotion was adapted from my new book being released April 3, 2018, Enough: Silencing the Lies that Steal Your Confidence. It is an expanded and revised version of the book, I’m Not Good Enough, with 50-percent new material. 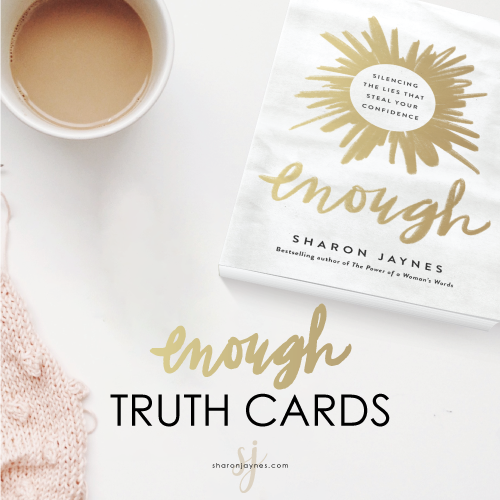 If you pre-order before April 3, you’ll receive a passel of free goodies including 3 FREE e-books: Your Scars are Beautiful to God, Listening to God Day-by-Day, and 5 Dreams of Every Woman.Plus you’ll get a printable set of 24 Truth cards! Click here for more details.