And she was mad at God.

I sat across the lunch table picking at a salad and trying to digest Jan’s words. Her startlingly teal eyes were tinted with frustration at God, primarily because of how she perceived He felt about women.

“I don’t understand God. It seems like He is against women. He’s set us up to fail. Even our bodies are weaker and that just invites men to abuse us. All through the Bible, I see how God used men in mighty ways.

Abraham, Moses, David, you name it; it is always the men. And polygamy. How could God allow that? Today, there’s so much abuse toward women,” she continued. “Where’s God in all that? There are so many inequalities and injustices between how men are treated and how women are treated. What kind of God does that? I think the bottom line is that God just doesn’t like women.”

Jan knew her Bible. She grew up in the church, had loving Christian parents, and accepted Christ when she was eight years old. She continued growing in her little girl faith and even felt a call to ministry when she was in the eighth grade. But all during her growing up years, Jan felt she wasn’t good enough. She saw herself as inferior to her younger brother, and always felt as though her parents favored him over her.

As is often the case with children, Jan’s perception of her earthly father colored her perception of her heavenly Father. The idea of male favoritism became the sieve through which her spiritual interpretations passed.

So what does God really think about women?

For far too long I looked at women in the Bible through the wrong end of the telescope, making them appear far too small beside their male counterparts. But God needled me to be a good student and take a closer look. I asked God how He really felt about women and He showed me through the life of His Son.

When Philip asked Jesus to show him the Father, Jesus answered, “Anyone who has seen me has seen the Father” (John 14:9). The writer of Hebrews describes Jesus as “the exact representation of his being” (Hebrews 1:3). And while I don’t presume to know the mind of God, I can understand His character and His ways through the ministry of Jesus, His Son.

As I studied, I was struck by Jesus’ radical relationship with the women whose lives intersected with his during those thirty-three years he walked on this earth. He crossed man-made social, political, racial, and gender boundaries and addressed women with the respect due to co-image bearers of God. The God-made-man broke the man-made rules to set women free. Every time Jesus encountered a woman, he broke one of the societal rules of his day.

Women were created as co-image bearers of God. Click & Tweet! But between the Garden of Eden and the Garden of Gethsemane, a lot changed. By the time Jesus made his first cry in Bethlehem, women lived in the shadows. For example:

But Jesus came to change all that. He didn’t speak out about the injustice; He simply went about His ministry ignoring the social rules.

He taught in places where women would be present: on a hillside, along the streets, in the marketplace, by a river, beside a well, and in the women’s area of the temple. His longest recorded conversation in the entire New Testament was with a woman.  And as we saw through the lives of several of the New Testament’s leading ladies, some of his best students and most daring disciples were women.

Jesus was willing to risk his reputation to save theirs. He was willing to go against the grain of religious leaders to liberate women from centuries of oppressive pious tradition. Click & Tweet!   He delivered women from diseases and set them free from spiritual darkness. He took the fearful and forgotten and transformed them into the faithful and forever remembered. “I tell you the truth,” he said, “wherever this gospel is preached throughout the world, what she has done will also be told, in memory of her.”

And now that brings me to you and to me. Never, dear one, doubt your value to God as a woman. You were God’s grand finale of all creation—His workmanship whom He loves. Click & Tweet! And Jesus was willing to break the rules to prove it.

Now that you know what it was like for women when Jesus walked the earth, how does it make you feel that He crossed the gender, social, cultural, and religious boundaries just for you? 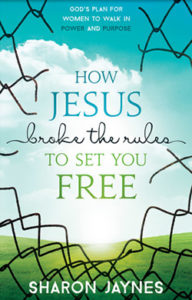 Jesus honored and respected women more than any other world religion, and that holds true for today. Come with me on a journey to discover how Jesus broke the cultural rules of his day every time he encountered a woman in the New Testament. You’ll see your story in her story.  Her hero will be yours.

Click here to learn more about the book, and watch a stunning book trailer.