Sometimes God will bring people who need encouragement across our paths in the most mysterious ways. That’s why we need to slow down and look around. Be sensitive to the little nudges of the Holy Spirit. You never know when you will be someone else’s miracle.

Jon Robinson experienced an unexpected miracle at a crucial time in his life.  He was a longtime media personality in my hometown, but when he was passed over for an anchor position he thought he had earned, he quit his job at the local television network and sank into a depression. He was hurting and alone. But an unusual twist of fate turned his life around. It all began with a wrong number.

Jon was sitting in the Waterfront Park in Charleston, S. C., watching seagulls soaring happily over the pristine harbor. He had taken a job in Charleston, but he missed his son back in Charlotte and mourned that he only got to see him on weekends. He was sinking in his sorrows, pondering the unwanted twists and turns of his life and wondering what his next step should be. Jon wasn’t happy with his circumstances and knew he was drinking too much. Something needed to change.

Jon’s musings were interrupted by the familiar ring of his cell phone.

He never answered his cell phone unless he knew the caller. He didn’t recognize the number, but for some reason, he mechanically answered and said, “Hello?”

“I’m sorry,” the caller apologized. “I must have the wrong number.”

“Well, before I hang up, I want you to know that God loves you and I’m praying for you,” the caller continued.

“You must be out of your mind.”

“No. This is a message God wants you to hear.”

Jon was intrigued by this woman and they began talking. Before he knew it, he was spilling out his heart and sharing his personal and professional problems. As he told of his hurt, she shared her hope. He poured out his soul-wrenching misery; she poured in her life-giving message. The caller told Jon about the hope and healing of Jesus Christ, and God began to open his eyes to the possibility of a new life.

For most of his life, Jon had been an agnostic. But since that “wrong number” with the “right answer,” Jon has committed his life to Jesus Christ. “I am a Christian. I’ve had an awakening.”

This has a familiar ring to it, doesn’t it? I’m thinking of the Samaritan woman Jesus met at the well. She thought it was a “wrong number” but it was just what she needed to hear. “You are a Jew, and I am a Samaritan woman,” she said. “Why are you asking me for a drink?” In other words, “I think you’ve got the wrong number.”

But it wasn’t the wrong number, the wrong time, or the wrong person. It was a divine appointment. She had questions. Jesus had answers.

We could be the one who has the answers someone is looking for. So, let’s be ready to share the hope that is within us Click & Tweet! , but let us do it gently and prayerfully, not obnoxiously and rudely.

While we blunder through our days with wrong turns and wrong numbers, we have the right answer! We possess the potential to change the course of a life for all eternity.

Heavenly Father, help me to be sensitive to those who cross my path today. Help me to be aware of divine appointments throughout all my days. Give me the right words to say at the right time to the right people. In Jesus’ Name, Amen.

Oswald Chambers once said, “A ready person never has to get ready.” What would you say to someone who asked you why you had hope in your life? You might want to pray about that and write it down. Get ready!

If you’re ready to get ready, leave a comment and say…”I’m ready!” 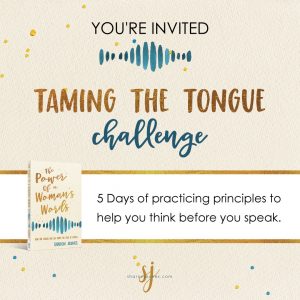 Words are one of the most powerful forces in the universe, and God has entrusted them to you and me. Every day you can speak life into the lives of others or suck the life right out of them. The choice is yours.

Let’s make the choice TODAY to use our words for good- to build one another up instead of tearing one another. Click here to join me for a FREE 5-Day Taming the Tongue Challenge.

The re-released and updated version of my best-selling book and Bible study guide, The Power of a Woman’s Words: How the Words You Speak Shape the Lives of Others are hot off the press. It includes new content, including a chapter on the power of a woman’s words to her adult children…it’s complicated! Perfect for your women’s ministry’s next Bible study!