I wonder if you’ve ever had hurt that just wouldn’t heal. I know I have. In today’s post, I’m talking to both of us. Maybe, just maybe, there is something we can do, or rather stop doing, to help the process.

Five-year-old Brooke was sitting in the backseat of the minivan while her mom and I ran errands. “Mommy,” she asked, “Is it worse to pick a scab or pick a mosquito bite?”

“You shouldn’t pick either one,” her mom replied.

I glanced back at Brooke as she tried to wipe away the bloody evidence that she had done both.

One day Jesus went up to Jerusalem for a feast. While He was there, He stopped by what was called The Sheep Gate Pool or Pool of Bethesda. The pool was surrounded by five covered colonnades or verandas where a great number of physically compromised people used to gather—the blind, the lame, the paralyzed. They believed that from time to time an angel would come down from heaven and stir the waters. The first one in the water after such a stirring would be healed. So, there they sat, day-after-day, waiting for the mysterious rippling.

A man who had been lame for thirty-eight years caught Jesus’ eye. He walked over and asked him, “Do you want to get well?” (John 5:6)

That is a strange question; or it is?

Sometimes we can grow comfortable being stuck in a bad story. Sure, there are heartaches and heartbreaks, disappointment and disillusionment, fear and fragile emotions, but at least we know what to expect out of life. Wounds can become like old friends that we wear as a badge of honor in some strange way. Sometimes it’s easier to cling to a bad story than embrace the redemption of a new one because the old one fits like a well-worn shoe. I’ve worn that old shoe with the floppy sole myself. I wonder if you have too.

For the lame man by the pool, healing would mean a drastic lifestyle change. He would have to get a job and become a responsible part of the community. He would have to stand on his own two feet literally and figuratively. Begging is all he’d ever known. Do I want to get well? Hmmm. I’m not sure. At least I know what to expect in this condition. Let me think about that.

The first step to healing from past trauma, no matter how we received it, is to decide that we want to get well and move past it—that we want a better story. Click & Tweet! We may not have deserved or caused the wound, but that’s what we got. It may not be fair, but those are the facts.

Even though the man never did answer Jesus’ question, Jesus stepped over his excuses and said, “Get up! Pick up your mat and walk” (John 5:8). And he did.

Jesus had a knack for telling people to do what they didn’t think they could.

Stretch out the fingers of your withered hand.

Stand up straight and unbend your back.

Roll the stone away and let the dead man out.

Open your blind eyes and tell me what you see.

We all have some kind of condition. Maybe it’s not as visible as the lame man by the pool, but we have something in our stories we’d like to change. And Jesus asks the question…do you really want to live differently than you are right now?

It’s paralyzing to live in the past. Jesus provides the way to move forward—to pick up our emotional mats and walk. Let’s do it together.

LORD, I really want to stop picking at this emotional scab of hurt and shame. I want to be healed of anything that has been holding me back from moving forward. Show me if I have any past hurt or shame that I’ve been picking at and give me the power to open my hands and let it go. In Jesus’ Name, Amen.

What emotional scab is God calling you to stop picking at today? Sometimes writing it out helps us hold ourselves accountable. Click on the comment button. Let’s be brave and share. 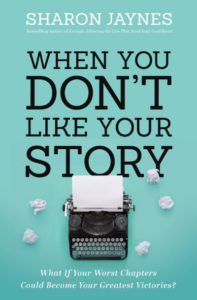 We all have pages of our stories that we wish we could rip out and throw in the trash. Chapters of heartache from what has been done to us and shame over what has been done through us. God doesn’t want to rip out those stories but repurpose them for good. If you’re ready to turn your worst chapters into your greatest victories, know this, God is ready, too. So, sink deep into God’s life-changing truths in Sharon book, When You Don’t Like Your Story: What if Your Worst Chapters Could Become Your Greatest Victories. The next chapter is just beginning.

Includes an in-depth Bible study for individuals and groups.