I shared over at Proverbs 31 Ministries yesterday, and thought you might be encouraged by these words too. It’s for every woman who has ever failed…and that includes me. Let’s talk about it.

Sometimes, walking or running away from my failure is easier than facing it.

I’ve walked away from a struggling friendship rather than working through the rough patch to keep it strong.

I’ve walked away from an open door of opportunity because the closed door of a past failure still resounded in my ears.

But what opportunities we miss when we abandon something, whether it be a relationship, job or a ministry. We don’t even consider that something better is beyond our failure! And that’s where we find Moses in Exodus 2-3.

Moses was raised as an Egyptian, but one day Moses was walking among his people and he saw an Egyptian beating a Hebrew slave. After glancing first one way and then another to make sure no one was looking, Moses killed the Egyptian and hid him in the sand.

The very next day, Moses realized his actions were widely known. Pharaoh was out to kill him, and his fellow Hebrews mocked him. Moses had failed on many levels, so he bailed.

Moses fled to a place called Midian, married a woman named Zipporah and joined her family business taking care of sheep. The next time we see Moses, 40 years have passed, and his life has not gone as he expected. Born into a palace and placed in the perfect position to alleviate his people’s oppression, he blew it all with one mistake.

Oh, sister, I’ve been there. Have you?

This is where many people plant themselves and settle. They make a mistake, fall flat on their face and run away to the far side of the wilderness, hoping no one will notice, maybe hoping to forget about it themselves. Praying everyone will just leave them alone while at the same time absolutely miserable that life has morphed into a monotonous, lackluster checklist. Like Moses, many bury their hopes and dreams to protect their hearts from further disappointment.

At just the right time, God set a bush on fire right in front of Moses. Exodus 3:4a tells us, “When the LORD saw that he had gone over to look, God called to him from within the bush,‘Moses! Moses!’”

Once God had Moses’ attention, God told him it was time to get unstuck and move forward. God wasn’t finished with Moses. In the following chapters of Exodus, we see that God brought Moses back to Egypt, where he was a wanted man. God placed him right in front of Pharaoh, where God spoke through Moses and eventually freed the Hebrews — the Israelites — to put them on the path to His promised land.

God is not finished with you or me, either. He has a plan … a good and perfect plan. And no failure of yours is big enough to thwart it. Click & Tweet!

So if you feel stuck, if you’ve failed and bailed to your far side of the wilderness, it’s time to get unstuck and move forward. God is calling you to let go of your failure, move forward in all He has for you to do and live boldly.

Dear God, I cringe at the times I’ve failed and bailed. But I am thankful for Your love that calls me out of the wilderness of failure and into the well-watered garden of Your grace. In Jesus’ Name, Amen.

Leave a comment and share one step of faith you feel God is calling you to take. 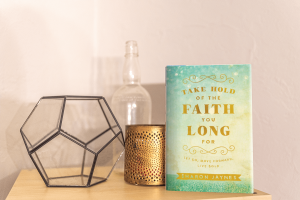 Take Hold of the Faith You Long For is one of my most favorite books I’ve ever written. It wasn’t my first book, but without the message of this book, I would have never had the courage to write one in the first place. I wonder, do you have any dreams that you’ve put on the back burner. In this book, you’ll stand with Moses at the burning bush and learn how to let go of everything that holds you back, move forward with everything God has already given you, and live bold with the confidence that is just a decision away.