Remember the first time you watched the movie, Jaws? I didn’t go in the water the entire summer after that. When my son was in middle school, we thought it might be fun for him to experience the reenactment!

We were in the fictional town of Amity Island, NY, where Jaws the man-eating shark, lurked below the surface of the still waters and terrorized vacationers who dared go there. Twenty tourists piled into a small boat at Universal Studios and drifted quietly in the “river” until the waters began to stir, and our greatest fears were realized!

The giant man-eating shark erupted from the water and attacked! He gnashed his teeth and lunged at the side of the boat. Women screamed, babies cried, and one overall-clad, hefty man in the back just burst out laughing. Soon his contagious laughter caused an avalanche of giggles throughout the boat and we all began laughing hysterically!

After much chomping at the boat, Jaws withdrew his fearsome fury and disappeared below the surface. But would he reappear? Were we safe? No! A few moments later, the mammoth shark emerged and lunged at our helpless vessel again and again. And each time, the laughing man in the back of the boat had the same effect—contagious, side-splitting, rip-roaring laughter. Tears streamed down my face in uncontrollable cackling. I’m not sure the tour guide had ever seen anything like it.

See, the man knew that the shark was a fake. He wasn’t real. To him, the attack was… well, funny.

Oh, that we would do the same when the devil tries to attack us. Yes, he is real, but he has no teeth and is no threat. He is a defeated foe who lays bloodied and beaten in the boxing ring still shouting, “I’m the greatest.” But he isn’t.

Even though the devil is defeated, the Bible tells us that he still roams around like a roaring lion seeking someone to devour (1 Peter 5:8), but he has no teeth. And I’ve never known anyone to be gummed to death. The only weapon the devil has is lies.

Jesus said, “When he [the devil] lies, he speaks his native language, for he is a liar and the father of lies” (John 8:44 NIV). The father of lies means that all lies began with him.

The meaning of the word lie is “a falsehood with the intent to deceive,” He deceived Adam and Eve in the Garden of Eden and he continues to try and deceive us as well.

Why did that silly man in the boat laugh when Jaws attacked our boat? He knew it wasn’t real. Why should we laugh at the lies of the devil? Because we know they aren’t true.

You’re a loser. Nobody loves you. You can’t do anything right. You’re worthless. You’re a failure. You’re not good enough. Chomp. Chomp. Chomp.

And you bust out laughing. Why?  Because that’s not true.

I’m a loser? That’s not true. I am more than a conqueror through Christ Jesus who loves me. (Romans 8:37)

I can’t do anything right? That’s not true. I can do all things through Christ who gives me strength. (Philippians 4:13)

I’m worthless? That’s not true. God has chosen me to be His treasured possession. My worth is not based on what others think of me, but on what God thinks of me—and He thinks I’m priceless. (Deuteronomy 14:2)

I’m a failure? That’s not true. I am a child of God who sometimes fails, but that’s not who or what I am. God has given me the victory through our Lord Jesus Christ. (1 Corinthians 15:57)

I’m not good enough? That’s not true. Because of the finished work of Jesus Christ on the cross and His Spirit in me, I am deeply loved, completely forgiven, fully pleasing, and totally accepted by God. I am empowered and equipped by the Holy Spirit to do all God has called me to do.

I’ll never forget that trip to the imaginary town of Amity Island, NY. And if I remember the story correctly, that shark gets his in the end.

Dear God, help me to stand firm on Your truth and not to listen to the lies of the enemy. Help me to recognize when the jaws of the enemy are chomping at my boat and simply laugh at the days to come! In Jesus’ Name, Amen.

What lie have you been believing about yourself or your circumstances? What is the Truth that negates that lie? Comment and let me know your thoughts! 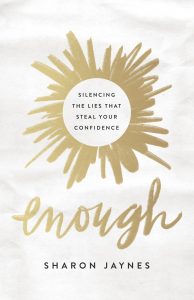 Do the voices in your head tell you that you are not good enough, smart enough, pretty enough, or just not enough, period? If so, it’s time to stop listening to the lies that sabotage your confidence and start embracing the truth of your true identity in Christ. In Enough: Silencing the Lies that Steal Your Confidence, I expose the lies that keep you bogged down in guilt, shame, and insecurity and shows you how to replace them with the truths about who you are and what you have as a child of God.

And for you wives, hop on over to The Praying Wives Club and join us in praying for our men.