Did you know the devil wants to sneak up on you? He prowls around like a lion just looking for the right opportunity.

If Satan came to you in a little red suit with a pitchfork and announced himself as the devil, you wouldn’t believe a word he said. I wish he would, but he is cunning and disguises himself as an angel of light (2 Corinthians 11:14).

When he deceived Eve, he even quoted Scripture—albeit twisted and distorted.

He has a collection of old tapes from your past, and he pushes rewind and play, rewind and play. Oh yes, he knows which buttons to push. He also uses personal pronouns like “I” instead of “you.”

The thoughts sound something like this: I am a failure. I am a loser. I can’t do anything right. I’m ugly. The thoughts sound like you, feel like you, and before you know it, you think they are you. That’s the reason it’s so difficult to detect the lies. They sound just like us.

In 1 Chronicles 21:1, the writer notes, “Satan rose up against Israel and incited David to take a census of Israel.” Of course, David thought it was his own idea, but the Bible clearly states it was not. He would have never counted his fighting men if Satan had stood before him and said, “Hey, buddy, I know God wants you to depend on Him and His power, but I think you should count those fighting men just to make sure. You never know if God is going to come through for you. This way you’ll know just how strong your army really is.”

The devil knew David would have thrown him out by his hairy toe if he’d shown up in bodily form, so the crafty manipulator put the thought in David’s mind. David thought it was his own idea, and off he went. Nine months later, when the census was complete, David felt guilty for his disobedience. God forgave David, but he still had to suffer the consequences of his actions.

Satan knows exactly which lies to whisper in your mind. He has watched you over the years and is well acquainted with your insecurities, weaknesses, and vulnerabilities.

Do you tend to get discouraged? He will plant seeds of discouragement in your mind.

As Peter warns us, “Be alert and of sober mind. Your enemy the devil prowls around like a roaring lion looking for someone to devour” (1 Peter 5:8 NIV). It’s up to us to recognize the lion’s growl of lies, and reject those lies with truth.

The Devil’s Lie: You are condemned.

Truth: I am forgiven and free.

Therefore, there is now no condemnation for those who are in Christ Jesus, because through Christ Jesus the law of the Spirit who gives life has set you free from the law of sin and death. (Romans 8:1-2)

The Devil’s Lie: You’re a loser.

Truth: I am a conqueror.

In all these things we are more than conquerors through him who loved us (Romans 8:37).

The Devil’s Lie: You should feel insecure.

Truth: I am secure.

And that’s how you do it!

What lie do you need to silence today? Leave a comment and we will stand in prayer with you! 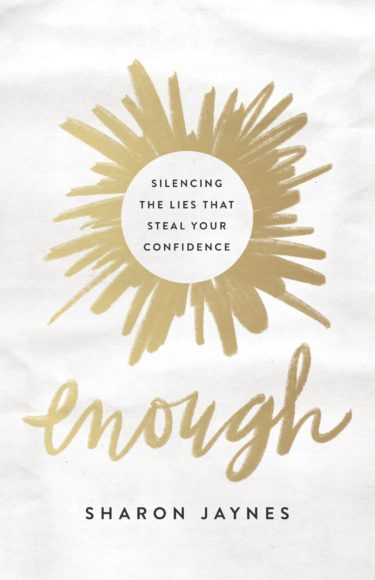 Do the voices in your head tell you that you are not good enough, smart enough, pretty enough, or just not enough, period? If so, it’s time to stop listening to the lies that sabotage your confidence and start embracing the truth of your true identity in Christ. It’s time to overcome the lies of the enemy with the promises of God.

Sharon’s book, Enough: Silencing the Lies that Steal Your Confidence releases April 3, 2018. Get ready to:

silence the voice inside that whispers you’re not good enough.

be preloaded with the truth to fight insecurities

walk in the surefootedness confidence of God’s unconditional love

This book is a revised and expanded version of I‘m Not Good Enough…and Other Lies Women Tell Themselves, with 50% new material!  If you pre-order before April 3, 2018, you can receive a FREE digital download of Your Scars are Beautiful to God, and a FREE pdf version of Listening to God Day by Day and 5 Dreams of Every Woman and How God Longs to Fulfill Them, plus other goodies. You’ll also be eligible to win an audio version of Enough! Click here to learn more.