I want to tell you a funny story today. One that taught me a great lesson. Here goes…

Fourteen exhausted, sweaty teenage boys plopped down on the bottom step of the gymnasium bleachers—my son being one of them. The assistant Junior Varsity basketball coach paced back and forth, lecturing them on the error of their ways. In the style of Sergeant Carter addressing Gomer Pyle, he yelled, “Who’s talking?”

The boys, in practiced unison shouted back, “You are, sir!”

For the next twenty minutes, they did just that.

Unfortunately for the merry band of athletes, school is not simply a place where sports are played, but also an institution for academic advancement. The next day it was time to see just how much advancement had taken place in the first four months of school via the dreaded semester exams.

Six of the basketball players sat nervously with their peers on the edge of their seats. Each grasped pencils in hand, ready to attack the twenty-page social studies test. Apparently, someone broke the total silence code with a whisper. The six-foot-five, two-hundred-and-fifty-pound teacher jumped to attention and yelled, “Who’s talking?”

Automatically, without even thinking, Chris Crutchfield, one of the basketball teammates, shot back, “You are, sir!”

The high school freshman social studies class erupted with laughter. Everyone was tickled, except the teacher and the terrified Chris.

More than half of the class (mostly boys overcome with mischief, my son included) raised their hands. “I want to be smart,” they answered back.

After school detention was crowded that week.

It was an innocent mistake—an automatic response—a reflex reaction. But it made Chris a hero for the day among his buddies. And in a way, he was my hero as well.

All through the Bible, God tells us to listen to Him. In the Old Testament, Isaiah penned, “Your own ears will hear him. Right behind you a voice will say, ‘This is the way you should go,’ whether to the right or to the left” (Isaiah 30:21 NLT).

When Moses saw a burning bush in the desert that was not being consumed, he turned aside, stopped what he was doing, and went to investigate. The Bible says, “When the Lord saw that he had gone over to look, God called to him from within the bush, ‘Moses! Moses!’ And Moses said, ‘Here I am’” (Exodus 3:4 NIV)

Ah, there’s the key. Moses turned aside; God had his full attention. Could it be that we become so wrapped up in our daily activities and to-do lists that we don’t take the time to turn aside when God speaks? Could it be we have grown unaccustomed to listening or unbelieving that He will speak at all? I wonder how many burning bushes I’ve missed in my own backyard.

Who’s talking? You are, LORD!

Those words give me chills. I don’t want to be that person.

On the other hand, God promises, “Call to me and I will answer you, and will tell you great and hidden things that you have not known (Jeremiah 33:3 NIV).

I do want to be that person. I think you do too.

So maybe Chris’s automatic response to the teacher wasn’t such a bad thing after all. When God speaks, let’s be ready to listen. Let’s become women who listen to God’s voice through Scripture, the Holy Spirit, nature, other people, and the circumstance in our lives. Then we will have moments of sudden glory when God makes His presence known right in the middle of our busy days.

Speak Lord, for I am listening. Help me to recognize Your gentle nudges and Your still small voice. In Jesus’ Name, Amen. 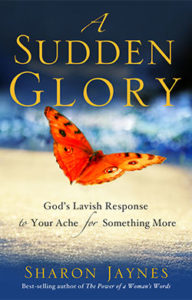 Did you know that God wants to speak to you, not just as a once in a lifetime event, but on a daily basis? Learn how to erase the line between your “spiritual lif

e” and your “daily life” so that “all of life” becomes an act of worship where we experience God’s presence in my  book, A Sudden Glory: God’s Response to Your Ache for Something More.

Also, I’m so excited that Never Less Than: Living Empowered, Esteemed, and Equipped When the World Tells You Otherwise is ready now available on my website. This is an updated and revised version of How Jesus Broke the Rules to Set You Free. This version has extra space for responses for the Bible study in the back. Perfect for group studies!