The story of Mary always touches me at the core of my being. What an amazing encounter for a girl so young. God’s plan of redemption was held by the thread of a teenage girl from Nazareth. Who knew it would be so strong?

We don’t know exactly how old Mary was at the time of Gabriel’s proclamation. Commentaries have suggested anywhere between thirteen and sixteen – marrying age during those days.

Nazareth was considered an insignificant town, yet God chose it for a significant role. Likewise, Mary was a seemingly insignificant girl, yet God used her in significant ways. Her selfless surrender serves as an example of the impact obedience to God’s call can have on our lives and on the lives of others as well.

So many questions come to mind when I think about Mary. Let’s start at the beginning and take a closer look.

Greetings, you who are highly favored! Luke 1:28

All along, it was God’s redemptive plan for the Savior of the World to be born of a woman. God certainly didn’t have to do it that way, but He chose to use a woman in the unfolding of salvation’s plan.

But why Mary? Why that particular girl? What was it about her that caused God to choose her?

We will never know all the answers to those questions, but we can get a glimpse into God’s heart by looking closely at the word “favored.”

Gabriel greeted Mary by saying she was “highly favored.” When we look at the word “favored” we realize that the choice had little to do with Mary and everything to do with God. The word “favor” is the Greek word “charis” which is where we get the word “grace.”

Grace is unmerited, undeserved, unearned favor from God. It is a gift that we don’t earn or deserve, but are given simply because God wants to give it.

The Bible says that we are:

given spiritual gifts by grace (Romans 12:6).

Don’t you just love that! He doesn’t dole out a teaspoon here and there, but He pours out his favor on us-bathes us in His grace.

Why was she chosen? The same reason that you and I were chosen to be His children. Because of His grace. We are not saved because we deserve it. She was not chosen because she deserved it. She was chosen because God’s grace was with her.

Mary needed that same reassurance. The reminder of God’s presence in her life would be crucial for the news that Gabriel was about to deliver.

And it is crucial for me and for you as we go about our days…for the gut-wrenching difficulties as well as the God-ordained opportunities.

Mary was greatly troubled at his words and wondered what kind of greeting this might be. But the angel said to her, “Do not be afraid, Mary, you have found favor with God.

You will be with child and give birth to a Son, and you are to give him the name Jesus. He will be great and be called the Son of the Most High. The Lord God will give him the throne of his father David, and he will reign over the house of Jacob forever; his kingdom will never end.” Luke 1:29-33

If Gabriel showed up at my door, I think, “do not be afraid,” would be an appropriate greeting. As a matter-of-fact, it seems like these are some of the first words God and His messengers spoke to many called on for special assignment.

And now, when God is calling just an ordinary girl out of the shadows to stand center stage, He reassures her with the same courage bolstering words that have echoed through the ages.

“Do not be afraid…God is with you.” And if anyone was going to need reassurance of God’s presence in her life, it was Mary.

In just a few verses, I am encouraged…warmed. I feel loved. I hope you do too.

I’m going to come back to Mary in my next blog post, but today, I want us to just ponder these few words to Mary and to you.

You are highly favored.

God is with you.

You need not be afraid…no matter what. 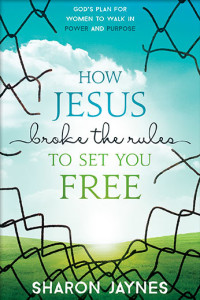 Today’s blog was adapted from How Jesus Broke the Rules to Set You Free. Yes! God’s has great plans for you…as a woman. He went to great lengths to set you free for a greater purpose than you ever imagined! Live bold, my friend. That’s what God intends.

Watch the trailer and be blessed! It’s not too late to order this empowering and encouraging book for Christmas.