I couldn’t believe it. The announcement of one of the most important days of my life…my dream come true…and there was a misprint! A horrible misprint. My husband and I were married in a small eastern North Carolina town on a beautiful August afternoon. There’s not a lot going on in Rocky Mount, so weddings and funerals receive full coverage. My wedding picture, in all its bridal glory, was a 4 x 5 crisp black-and-white photo displayed in the local section of the paper. Under my smiling face read the caption: Mrs. Steven Hush Jaynes.

I was mortified! My mother-in-law did not have a lapse in judgment when Steve was born. She did not name him Hush. His middle name is Hugh. Oh my goodness. What were those people thinking? How could they be so careless? Didn’t they realize I would cut that picture out and place it in my wedding album for all eternity? Didn’t they understand the teasing that would surely follow that misprint? Didn’t they understand how important this was? Hush! I was furious.

My only hope was that the even smaller town where I was actually born would also run the wedding announcement. They did. A few days after discovering the “Hush” dilemma, the tiny newspaper from Spring Hope, North Carolina, arrived. I unfolded the page and there, as big as day, was my wedding picture. This one was 5 x 7. And underneath it read…Mrs. Steven Hush Jaynes. Oh my glory! Now I was crying.

On the same day I received the newspaper from my husband’s hometown of more than 500,000 people. Underneath my itty-bitty wedding picture were the words…you guessed it…Mrs. Steven Hush Jaynes!

Suddenly the truth began to sink in. This was not the error of inept newspapers. It was my fault. When I print, I’m a bit sloppy, and my g seldom closes, looking like an s. I guess it looks a lot like an s. So now it was time for me to hush.

Have you ever been in a situation where you were blaming someone for a mishap and suddenly realized you were the one at fault? Jesus said it this way, “Why do you look at the speck of sawdust in your brother’s eye and pay no attention to the plank in your own eye? How can you say to your brother, ‘Let me take the speck out of your eye,’ when all the time there is a plank in your own eye?” (Matthew 7:3-4).

Jesus went on to say, “First take the plank out of your own eye, and then you will see clearly to remove the speck from your brother’s eye” (Matthew 7:5). I don’t know about you, but I have plenty of sawdust in my own life to keep me busy.

I still put the newspaper announcements in our wedding album. It is a great reminder of two truths.

Number two:
When I start casting blame or pointing fingers, I need to take a good look in the mirror and hush.

How are you in the finger-pointing department? Here’s an idea. [tweetherder]When feeling the urge to point a finger and place blame on someone, fold your hands together and pray instead[/tweetherder]. What God reveals might be surprising.

Dear Heavenly Father, sometimes I am too quick to blame someone else for my mistakes. Help me to always examine my own heart and let You take care of the rest. Thank You for the embarrassing reminders that I am a work in progress and You are not finished with me yet. In Jesus’ Name, Amen 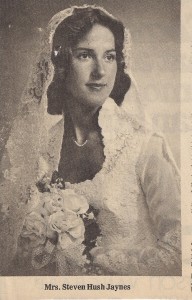 I have so many crazy stories, someone asked me if they were all true. Yep. They are. Here’s my wedding picture to prove it. Taken in 33 years ago. Mrs. Hush Jaynes in all her totally embarrassing glory.

If you want to learn more about how to use your words to speak life into those around you, how to encourage and not discourage, see my book The Power of a Woman’s Words. There is also an accompanying Bible study guide and DVD which is perfect for your next women’s Bible study group.