I often hear people say, “It is what it is.” What they mean is, the situation is not going to change, so just accept it; get over it! Let me tell you why I don’t like the saying. “It” rarely is what it looks like it is. In fact, what we think the situation is, usually isn’t what it is at all.

The Old Testament story of Ruth and Naomi is a perfect example of something not being at all what it looks like it is. Because of a drought in their hometown of Bethlehem, Naomi, her husband and two sons, moved to Moab. Her sons married Moabite women, but in a ten-year period, all three men died. Naomi heard the famine in Bethlehem was over, so she decided to move back home. One daughter-in-law, Orpah, stayed behind, but the other, Ruth, insisted on going with her.

Naomi was so downcast and discouraged that her very countenance made her unrecognizable to those she had known before. When Naomi heard the whispers as she walked by, she stopped and said, “Don’t call me Naomi [which means pleasant]. Call me Mara [which means bitter], because the Almighty has made my life very bitter. I went away full, but the Lord has brought me back empty. Why call me Naomi? The Lord has afflicted me; the Almighty has brought misfortune upon me” (Ruth 1:20–21).

I’ve heard the same resentment toward God in the voices of others experiencing disappointment and discouragement. I bet you have too. For some of us, the voice we heard was our own. I can almost hear her saying, “It is what it is!”

It may feel that God is on a long lunch break during our difficult chapters, but remember, He’s always working behind the scenes. He is the Almighty, the All-Sufficient One, whether or not we can feel it in the moment. Click & Tweet!

God’s hand was not against Naomi. He wasn’t intent on afflicting her, as she claimed. Naomi was so blinded by grief and bitterness she couldn’t recognize God’s gracious provision walking right beside her in the form of a Moabite girl whose name meant “woman friend.”

Once they arrived, she decided to go out and glean wheat behind the pickers—to gather the scraps others dropped while working. Even though she knew it would be dangerous for a Moabite woman to venture into an Israelite field, she took a chance in order to provide for herself and Naomi.

Okay, now, picture this. There must have been dozens of fields she could have picked. Pick a field, any field. She picked one, or did she?

“As it turned out, she was working in a field belonging to Boaz, who was from the clan of Elimelek” (2:3, emphasis added). Another translation says, “Now she just happened to…

She just happened to end up in Boaz’s field? I hope you don’t believe that for a minute. I can almost see God pointing her in the right direction. Boaz was Ruth’s deceased husband’s kinfolk; a relative Naomi had all but forgotten—though God hadn’t forgotten at all. He was working behind the scenes faster than those gleaners could bundle those sheaves.

In the end, Boaz became Naomi’s go’el, her kinsman redeemer, when he also became Ruth’s husband. Shortly after Boaz and Ruth were married, she conceived and bore a son named Obed. Obed became the father of Jesse, who became the father of King David, who was in the lineage of Jesus. So, “it is what it is” wasn’t what it was after all.

Jesus said, “My Father is always at his work to this very day, and I too am working” (John 5:17). That means that when we look at a situation and think “it is what it is,” we may have no earthly idea what God’s doing behind the scenes.

Heavenly Father, I know that what I see with my eyes is not all there is to any situation. I trust that You are working out everything for my good, to grow me and shape me into the image of Your Son. And for that I am grateful. In Jesus’ Name, Amen.

When is one time in your life when you thought you knew what was going on, but later realized you didn’t? 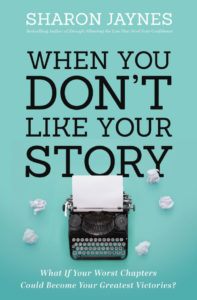 Check out my book to see how the pages you’d like to tear out of your story could become the ones that God uses the most. If you feel stuck in a bad chapter, this book will help you move forward in freedom and victory! Includes a Bible study guide.