Sometimes I feel like such a mess. I wonder what God even wants with me. Have you ever felt that way?

And then God reminds me that ALL His children are a mess in one way or another.

A common theme throughout Scripture is overcoming failure. Abraham passed his wife, Sarah, off as his sister because of fear (Genesis 12 and 20). Lot failed to stand up for what was right and offered his daughters to immoral men (Genesis 18-19). Jacob betrayed his father and stole his brother’s blessing (Genesis 27). Moses struck the rock twice in anger when God commanded him to strike it once (Numbers 20:11). Aaron gave into peer pressure and made a golden calf (Exodus 32).

Miriam had a bout of jealousy and tried to usurp her brother’s God-appointed position (Numbers 12). Jonah hopped on a boat and headed in the opposite direction when God called him to go to Nineveh (Jonah 1:1-3). Samson fell for the whims of a Philistine woman and gave away the secret to his strength (Judges 16). David committed adultery and murder and then tried to cover it up (2 Samuel 11).

You know what’s amazing? Most of these men and women are listed as people of great faith who “conquered kingdoms, administered justice, and gained what was promised; who shut the mouths of lions, quenched the fury of the flames, and escaped the edge of the sword; whose weakness was turned to strength; and who became powerful in battle and routed foreign armies” (Hebrews 11:33-34, emphasis added).

We have a great cloud of witnesses who can identify with failure. We are never alone in that regard.

Oh, friend, failure doesn’t have to be fatal or final. During a time of failure, the Enemy will tell you to quit trying, that you’re hopeless, worthless, and powerless to succeed.

Don’t believe him. Reject the lie and replace it with truth. “No, in all these things we are more than conquerors through him who loved us” (Romans 8:37). “I can do everything through Christ, who gives me strength” (Philippians 4:13 NLT). God said, “My grace is sufficient for you, for my power is made perfect in weakness” (2 Corinthians 12:9).

Learn from your failure under the tutelage of the Holy Spirit, and then move on. Click & Tweet! Nothing makes the devil madder than a child of God who fails, gets back up, and tries again with the power of God moving him or her forward.

Recognize the lie: I’m such a failure.

Reject the lie: That is not true.

Replace the lie with truth: I can do everything through Christ, who gives me strength (Philippians 4:13 nlt).

God, help me to learn from my mistakes and move on. Help me not to get stuck in the mire of my mistakes or the senselessness of my sin, or the remorse of my regret, but to move forward with the reassurance of Your complete forgiveness, mercy, and grace. I don’t deserve it. I thank You for it. In Jesus’ Name, Amen.

What do you think God would say to you when you tell yourself “I’m a failure”? Leave a comment and let’s compare notes. 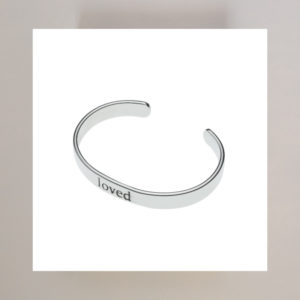 For a limited time, I’m offering beautiful cuff bracelets from the women of Fashion and Compassion: Blessed, Strong, Loved.

These handmade, feminine silver-plated and gold-plated cuff bracelets are sweet reminders that you are blessed, loved, and strong. They are essential staples that look great on their own but are also the perfect pieces for mixing and matching. Limited quantity available. Click here to learn more.

Today’s devotion was adapted from Sharon’s book Enough: Silencing the Lies that Steal Your Confidence.