When I was a little girl, I loved pretending to be a bride. I’d wrap a sheet around my body, drape a towel over my head, and hold a bouquet of plastic flowers to my chest. Then I would start at one end of the hallway in our ranch-style house and saunter down the “aisle.” In my little mind, all eyes were on me as my sheet became a pearl-studded wedding gown, my towel a lace veil, and the bouquet a spray of white roses.

My Uncle Ernest understood the longings of little girls to be a bride, so for Christmas one year, he gave me a two-foot-tall doll dressed in full bridal regalia. Along with her white wedding gown and netlike veil, she had cropped, curly brown hair that felt as real as my own, soft plump skin that squished when I squeezed her, and moveable eyelids lined with thick black lashes.

Her eyes opened and closed with her changing positions so that when she lay in her box, she resembled Sleeping Beauty just waiting to be kissed. Her perfectly shaped lips were small and dainty, and her crystal-blue eyes appeared strangely real.

But there was one problem with this delightful gift. Because she was so expensive, my mother wouldn’t allow me to play with her.

“You’ll have to wait until you are older,” she explained. “She’s too nice to play with. You might tear her gown. We’ll just keep her in the box until you’re old enough to know how to take care of her.”

So the bride doll remained in her box, safely stowed away in the bottom dresser drawer. Day after day, I slowly opened the drawer and stole a peek at my doll as she lay sleeping inside the drawer like a treasure in a safety deposit box. Sometimes I removed the box lid and gently stroked her pink skin, but I knew if I ever took her out of the box and played with her, I would be in big trouble. As time passed, I forgot about the bride doll in the drawer, and today, I don’t even know what became of her.

I am sure the doll’s fate was never my Uncle’s intent when he gave her to me. I imagine he envisioned me spending hours and hours playing with her, pretending with her, and enjoying her. As a matter-of-fact, had he known the doll lived in the bottom dresser drawer, I think he would have been sorely disappointed.

Oh friend, have we done the same with the greatest gift of all time—Jesus? Have we accepted the gift of the gospel and then stored it away in a drawer for safekeeping? [Tweet this]  Have we put Jesus on display, but neglected or refused to enjoy Him? Have we made the gospel into a religion in a box rather than a relation in the heart? 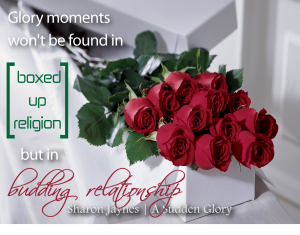 Shorter Catechism, written by the Westminster Assembly in 1647, states, “The chief end of man is to glorify God and enjoy Him forever.”

Enjoy God! The only way to enjoy God is by being in His presence, by making Acts 17:28, in Him we live and move and have our being, a present reality. Glory moments will not be found in a boxed-up religion but in a budding relationship. [Tweet this]

What does God want from us? Some say that He wants obedience and sacrifice—that He wants us to stick to the rulebook and color in the lines.

Others say that God wants us to be happy and victorious in all things.

None of that is necessarily wrong, but it is not the greatest desire of God’s heart. What He longs for, more than anything, is for you to be in relationship with Him. He wants your heart. He wants you to enjoy Him, to love Him, to join Him in intimacy as you live and move and have your being in Him.

So here’s the question: Are you enjoying your relationship with God? Laughing with Him? Singing with Him? Dancing with Him? Leaning in and telling Him your secrets?

Give it a try? Enjoy being in His presence today!

Leave a comment and tell me one of the ways that you Enjoy God.

CONGRATULATIONS to Lisa Hicks who is the winner of the 2 Starbucks gift cards from the random drawing of comments from my last post! One for her and one to share.

Want to learn more about how to experience God in your daily life? In the spin of the laundry and the sizzle of the bacon? To soothe the “glory ache” with more of His presence? A Sudden Glory: God’s Lavish Response to Your Ache for Something More can help you get there.