Lisa was a party girl who partied every chance she could get. She was a bartender. A cocktail waitress. A fun-lovin’ girl without a care in the world…until the stick turned blue.

Lisa had grown up in a Christian home and walked the aisle when she was eight-years-old. But in her twenties, Lisa put Jesus up on a shelf to live the wild life. But one day, in 1996, she discovered she was pregnant, and her fast-paced world came to an abrupt stop.

After several home pregnancy tests, Lisa decided that she needed an “official” test from a medical facility. She got in her car, and headed to the Planned Parenthood office where she had gotten her contraceptives. She knew that they would encourage her to have an abortion, and frankly, she was committed to continuing her partying life-style with as little interruption as possible.

But on the way to the clinic, something happened. God happened. Lisa saw a two-story brick building with a sign that read, “Charlotte Pregnancy Care Center.” She felt as though God was beckoning her to pull into the parking lot. He was. She did.

Let me let Lisa tell you what happened in her own words:

I remember it just like it was yesterday. From the moment, I got out of my car, I just felt like the Lord was with me. I walked into the Center and was met by a woman with a nice, warm and caring smile. Not a smile that was a, “I’m just doing my job” smile, but a caring smile.

She came over, met me, introduced herself, and put her hand on my arm.  “You have come to the right place,” she said. “ We’re here to help.”

I felt like I had just walked into the arms of Jesus. The love, the compassion, the confidence and sensitivity in her voice was incredible. She wanted to know about me. We talked and she listened.  She was gentle and kind.

We discussed how I felt and what I wanted out of life. What I wanted for me and for my baby. She called it a “baby.”  Not “a pregnancy” like so many do in the early stages of pregnancy. She confirmed that my test was positive and gave me a due date.

I remember hearing her words and the Holy Spirit using those words to tell me it was going to be OK, but that I would have to change!

A week or two went by and this woman called to check on me and to ask how I was doing. I thought wow—she cares!

I went to my doctor to begin my prenatal appointments, and he did an ultrasound. He had some bad news.

He said I had a problem in my uterus and that the embryo had connected to a part of my uterus where there was some sort of separation.

His words to me were, “It will not live.  Your body will not be able to carry to term and besides, you can easily abort it at this stage and get back to your normal life. This does not have to be an interruption.”

I even asked my mom who came to the appointment with me, if she heard it too. She didn’t. The voice was just for me.

When the doctor came back in, I looked at him and said, “I’m not having an abortion. I’m having my baby. “ 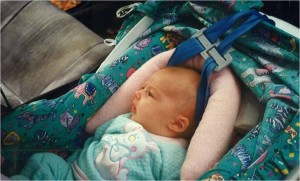 In the fall of 2012, our Charlotte Pregnancy Care Center celebrated its thirtieth anniversary. They had planned a celebration banquet with Bruce Wilkerson as the speaker. For a year the staff had prayed for just the right testimony to share.

As soon as the announcement about the banquet went up on their website, Lisa called to order a ticket.

“The center has meant so much to me,” she began. “I came to the center seventeen years ago on my way to an abortion clinic…”

Lisa told the receptionist the story just as I told you, and ended her conversation with these words: “My daughter, Jordan, just turned sixteen, and we want to celebrate by coming to the banquet.”

With tears streaming down her cheeks, the receptionist ran into the director’s office and said, “Erin, I think I just found the testimony for the banquet.”

Erin met with Lisa at a restaurant, told her the story, and showed her pictures of Jordan today. 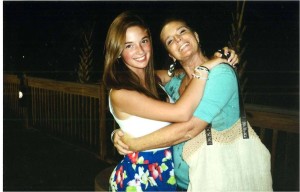 Then she said, “By the way, I saved a slip of paper from the Center that the counselor gave me that day – the one that confirmed I was pregnant. I keep it in Jordan’s baby book. Would you like to see it?”

Then Lisa slid the slip of paper across the table for Erin to see.

At the bottom, the name of the counselor. 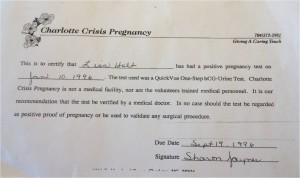 Oh friend, when Erin emailed and told me this story, I cried for 4 days. I am not kidding.

Of all the babies that were saved over past thirty years at that one Center, God put His hand in the hat and pulled out this story just for me, and for you.

Here’s what you need to know:

When I felt God calling me to be a counselor at Center, I did not want to do it.

I had experienced over six years of infertility treatment off and on, and had lost a child. And now God was calling me to volunteer at a place where most of the clients did not want their children.

To be honest, I was a little bit ticked off at God. But I put my frustrations, pain, and hurt aside and obeyed. I said, “Yes.”

Here’s another thing you need to know:

And here’s what you need to remember:

Sometimes God will call you to do a work, – a work that He has planned for you to do (Ephesians 2:10). You may not want to do it. You may feel that you are not smart enough, talented enough, strong enough, or bold enough. You may even argue with God like Moses did (Exodus 3-4). You may laugh at God like Sarah did (Genesis 18:12 ). But if you obey God and depend on Him to work through you, amazing things will happen.  People will be blessed. You will be blessed.

If you are ready to experience the abundant life by saying “yes” to God, leave a comment that says:  I’m ready to be radically obedient to God and abundantly blessed by God.

If you want to learn how to overcome the lies of the enemy that tell you that you’re not good enough, smart enough, talented enough, spiritual enough…just plain “not enough,” check out my book, I’m Not Good Enough…and Other Lies Women Tell Themselves. This will give you the confidence to say “yes” to God with the confidence of a woman who knows she’s empowered by Him.