I’ve had some things to happen in my life that I would just as soon forget. I bet you have too. But as soon as I start to shred the memory and throw it in the trash, God says, “Hold up. I’ve got a good purpose for that bad story.”

Joseph learned that lesson, too. Joseph had been sold into slavery by his jealous brothers, falsely accused of sexual harassment, and left in a prison to die. Then God miraculous rescued him from prison and made him second in command to the Egyptian Pharaoh. By his thirty-seventh birthday, Joseph had two sons. One he named Manasseh, which means “God has made me forget all my trouble and all my father’s household.”

The second son he named Ephraim, which means “it is because God has made me fruitful in the land of my suffering.”

Many years after his sons had been born, Joseph learned that his father, Jacob, was ill.  So he took his two sons, Manasseh and Ephraim and traveled for one last visit.

When they arrived, Jacob said, “Bring the boys to me so I may bless them.”

Joseph brought his sons to his father’s bedside. He placed Ephraim on his right toward Jacob’s left hand and Manasseh, his first born, on his left toward Jacob’s right hand. But instead of giving the blessing to Joseph’s firstborn, Jacob reached out his right hand and put it on Ephraim’s head, though he was the younger. Then he crossed his arms and put his left hand on Manasseh’s head.

Joseph tried to stop his father from giving the blessing to the second born rather than the firstborn, but his father refused.

It is the same with you and with me. God does not want us to simply forget the pain of the past. He wants us to be fruitful in the land of our suffering! Use it for good. Go back to today’s truth. God doesn’t comfort us just to make us comfortable. He comforts us to make us comfort-able. Able to comfort those with the comfort we have received. That is the good fruit. How is God calling you to use your seemingly bad stories for a good purpose?

Dear Lord, I thank You that nothing is ever wasted in our life experiences. The world says, “Just forget about it” when it comes to our past struggles. You say, “Just use it! Be fruitful!” Show me ways that I can use what I have gone through to help other people. Lord, I pray that You will make me fruitful in the land of my suffering. In Jesus’ Name, Amen.

What have you gone through in your life that you could now use to help someone else? Leave a comment and share in just a few words. Begin with My story of ___________. 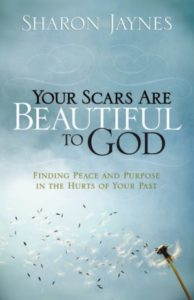 God longs for you to do more than just “forget about it.” He wants you to turn those “all things” that Romans 8:28 talks about into ministry opportunities! Sister, when you begin to use your past mistakes and hurts for the glory of God, Satan has no more power over you! He can’t use it against you any longer. I don’t know about you, but that makes me want to shout! Are you ready to turn your hurt into hope, your pain into purpose, and your messes into ministry? Then see my book, Your Scars are Beautiful to God: Finding Peace and Purpose in the Hurts of Your Past. I’ll be cheering you on!