Today I want to share with you a story that I wrote a few years ago. In it, I tried to imagine what it would have been like to be one of the shepherds who visited Jesus at His birth. For just a moment, I want you to pretend that you are reading a letter that one of the shepherds wrote to his brother, Mathias. It’s a different sort of blog, but I hope it gets you in the Christmas Spirit!

As I am writing you this letter, my hand is still a bit shaky. I’m not sure it will ever stop. But I must tell you about an incredible experience that happened to Matthew, Simeon, Levi, and me, two weeks ago. As usual, we were watching our sheep on a hillside east of Bethlehem. I was on the night watch and the others were sleeping. There was something unusual about the sky that night. I can’t explain it, really. Like heat reflecting off the desert sand, the stars seemed to be jockeying into place, fidgeting and restless in their usual stayed positions. Diamonds danced on the inky backdrop rather than standing sure and still. Even the sheep seemed to notice the heavenly mirage.

Then it happened. As if a curtain was pulled back, I saw what was stirring the stars…angels!  Yes, angels, angels, everywhere. Immediately, the others awoke to the celestial lights, flapping of wings and the resonation of indistinguishable singing.

At first, only one spoke. “Do not be afraid. I bring you good news of great joy that will be for all the people. Today in the town of David a Savior has been born to you; he is Christ the Lord.  This will be a sign to you: You will find a baby wrapped in cloths and lying in a manger.”

Then, the curtain was drawn back even more and the sky was filled with angels! “Glory to God in the highest!” they sang, “and on earth peace to men on whom His favor rests.”

The flapping of their wings stirred the air, whipped our hair, and blew our tunics in all directions. Amazingly, the sheep were calm during this majestic occurrence. It was almost as if nothing unusual was happening. Perhaps this was not the first time they had seen an angel. Who knows? We, on the other hand, were awestruck. Tears streamed down our dusty cheeks. We fell to our knees, marveling at the beauty of heaven displayed before us.

Then quietly and slowly, the curtain returned and the angels were no more. We rose to our feet and began to run in the direction of Bethlehem to see this babe. How did we know where to go?

Mathias, the only way I know how to explain it is to think of my relationship to my sheep. When I am grazing in a field with several of my friends and their flocks, our sheep get all mixed together. Sometimes five different flocks can be mingled together at one time. But as soon as I call to my sheep, they separate from the others and follow me home. They know my voice. Each and every one of them can distinguish the voice of their shepherd and they know whom to follow.

That’s how it was that night. It was as if a shepherd had called my name. I knew his voice and he called me out from among all the rest.

Where did we go? To a palace? To a temple? To a stately manor? No, we went to a stable. But isn’t that where a shepherd would call his sheep? To a stable?

What did we see? A burning bush like our ancestor Moses? Writing on the wall? A vision? No, we saw a baby, wrapped in swaddling clothes and lying in a manger–just like the angel had said. He didn’t speak, but somehow, he called our names. He is the Christ, Mathias. The one of whom the prophets spoke.

Do you remember the prophet Isaiah’s words? “He tends his flock like a shepherd; He gathers the lambs in his arms and carries them close to his heart; he gently leads those that have young.” When I saw the babe (who later his parents told me was named Jesus,) I knew this was the one of whom the prophet spoke. And didn’t the prophet Micah say the Messiah would be born in Bethlehem? It all makes sense to me now, and yet it is still a mystery.

Why me? Why did God choose to send the angels to announce the Savior’s birth to me –a lowly shepherd? I don’t know the answer to that, my friend. All I know is that one starry night, I was a shepherd. And then God spoke my name and I became a sheep. And now, my friend, God is calling your name as well.

I don’t know what will become of this baby in the manger, but I do know this…the world will never be the same again – nor will I.

Your brother, the sheep.

The shepherds were not the only ones excited about Jesus’ birth. Why not try your hand at some creative writing. Imagine that you are one of the wise men (wise women). Try writing a letter to one of your family members after visiting Jesus and delivering your gift. 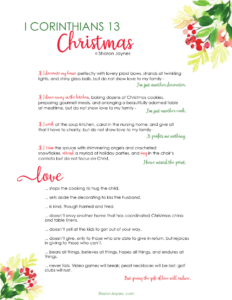 to download a printable version of my I Corinthians 13 Christmas Style. 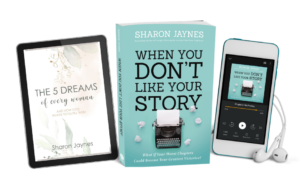 Also, click here to learn more about my new book being released January 26, 2021, When You Don’t Like Your Story: What if Your Worst Chapters Could Become Your Greatest Victories. Pre-order by January 25 and receive free bonus material.