I’m posting over at Proverbs 31 Ministries today. I thought you might enjoy this devotion as well! But you might not! It’s about a verse that made me stop in my tracks.

“With such nagging she prodded him day after day until he was sick to death of it.” Judges 16:16 (NIV)

The verse stopped me in my tracks. I didn’t like it. Not one bit. Here’s what happened.

Samson was God’s chosen man during a time when the judges ruled Israel. From birth, he was destined to liberate Israel from the Philistines. While Samson was incredibly strong in body, he was very weak in character. Among his character flaws was a fondness for Philistine women. One was named Delilah.

The Philistines saw Samson’s infatuation with one of their own as a pathway to discovering the secret to his supernatural strength. So each of the Philistine officials offered Delilah 1,100 shekels of silver to uncover his secret. Three times she begged him reveal the source of his strength, and three times he lied to her.

Listen to her words, and imagine the tone. “How can you say, ‘I love you,’ when you won’t confide in me? This is the third time you have made a fool of me and haven’t told me the secret of your great strength” (Judges 16:15b, NIV).

Then comes the verse that stopped me in my tracks: “With such nagging she prodded him day after day until he was sick to death of it” (Judges 16:16). Ouch.

Unfortunately, Samson told Delilah the secret. He just couldn’t take the nagging any longer. As a result, his enemies shaved his head, and his strength seeped out with each swipe of the blade. Samson lost his strength and eventually his sight and his freedom … all because he succumbed to the words of a nagging woman.

I don’t want to be that woman, and I know you don’t either. Praise God there’s another alternative! Prayer. The Bible says, “The earnest prayer of a righteous person has great power and produces wonderful results” (James 5:16b).

After God created Adam, He said, “It is not good for the man to be alone. I will make a helper suitable for him” (Genesis 2:18, NIV). The original Hebrew word for “helper” is ezer — one who comes along to aid, assist or rescue. God didn’t create the woman simply because the man was lonely. He fashioned women with purpose, and one of our greatest opportunities is to be prayer warriors for our men.

Prayer is not a means to gain control over our husbands, to whip them into shape and make them the men we want them to be. Instead, prayer is a means of relinquishing control and asking God to shape them into the men He wants them to be. Prayer is the conduit which releases God’s power for our marriages.

So let’s put the nagging aside, and take a moment to pray for our husbands. If you’re single, pray over the important men in your life. Here are four areas to start with:

His Mind: Lord, I pray my husband will fix his thoughts on Jesus today. May he make Jesus the centerpiece of everything he believes and thinks. (Hebrews 3:1)

His Eyes: Prompt my husband to pay attention to what he looks at today. Keep him alert to the devil’s tempting tactics to draw his eyes to sin. Empower him to have restraint and show self-control by turning his eyes away from temptation, and thus escape the enemy’s trap. (1 Peter 5:8)

His Shoulders: Help my husband trust that You will supply all his needs according to Your glorious riches in Christ Jesus. Take away his burdens and worries, and replace them with confidence and peace. (Philippians 4:19)

His Feet: May Your Spirit guide my husband to walk in the way You have commanded him so he may live and prosper and prolong his days. Hem him in so he will not veer to the right or the left but will keep his feet on the path You have marked out for him. (Psalm 139:5 and Deuteronomy 5:33)

If you prayed for your man today, leave a comment and say, “I’ve got him covered!” 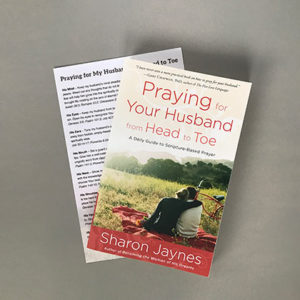 Sometimes it’s hard to know what to pray for your husband, but in my book, Praying for Your Husband from Head to Toe, I map out 16 landmarks to help you consistently and effectively cover your husband in prayer. The 30-day prayer guide provides Scripture for each day along with corresponding prayers to target crucial areas of every man’s life.

Looking for some romance ideas for Valentine’s Day? Click over to my free printable of 25 Ways to Romance Your Husband.