Have you ever wondered where God was when your life was falling apart? Oh friend, let me assure you, He is always working behind the scenes. Just because we can’t see that He’s working, doesn’t mean that He isn’t.

I remember when  I met my husband at a college Bible study while we were in college. There he sat with the sleeves of his red flannel shirt rolled up over muscled biceps. He had a Bible in his lap, Jesus in his heart, and me wrapped around his little finger. Three-and-a-half months later, we were engaged. Six months after that, I became his wife.

The following year, we began to pray where we would live and work after graduation. We prayed. We fasted. We toured various towns and looked at several opportunities. After several months, we felt certain God was calling us to a little town called Pineville, just outside of Charlotte, NC.

After graduation, we moved to Charlotte, and set up house in a tiny apartment near the office where Steve would be working. The rent was half-price for the first three months, which was a huge bonus for a young couple with nothing but school debt on their balance sheet. Smiles all around.

However, when Steve went to the office to finalize his work schedule and management particulars, a trapdoor opened beneath his feet.

“Steve, I’ve been thinking about it,” the potential partner began, “and I don’t think this is such a good idea after all. I’ve changed my mind.” He extended his hand to my twenty-five-year-old stunned husband and said, “Good luck to you, son.”

When Steve came home and told me the news, we were both shell-shocked. “What do you mean, he changed his mind?” I cried. “He can’t do that! We’ve just moved here. He made a commitment!”

A host of raw emotions collided with real questions for God. How could we have been so wrong? Didn’t we hear you correctly? We prayed. We fasted. We wanted nothing more than to do what you wanted us to do where you wanted us to do it. Now, here we sit in a new city, with a big student loan, no job, no future. What are we supposed to do? I did not like this story!

I felt like God had left us high and dry. But he hadn’t. He was simply moving the puzzle pieces into place for his perfect plan.

I think young Joseph must have felt the same way. God had given him two dreams about how his whole family would one day bow down to him. He was going to be a man of power. However, over the next several years, the was sold into slavery by his brothers, worked as a servant in the official, Potiphar’s, household, falsely accused of attempted rape, and thrown into prison.

Don’t you know he was thinking…this is not how the story is supposed to go! God, where are you? Get me out of here!

But at just the right time, the Pharaoh had a dream that only Joseph could interpret—seven years of plenty followed by seven years of famine. The Pharaoh was so impressed, he made Joseph second in command of the entire kingdom, and he saved the entire nation from starvation.

Our limited vision doesn’t allow us to see how God is working behind the questionable scenes in our lives, but we must believe that he is. Click & Tweet! In fact, it may be precisely in the moments we understand him the least that he is working the most.

Jesus told his disciples, “You don’t understand now what I am doing, but someday you will” (John 13:7 NLT). Sometimes, it is only after the fact that we understand that what we call setbacks were really God’s setups all along.

Three months after the devastating news that Steve’s job fell through, a position opened up that had not been available when we were was first looking. If we had written out our best-case scenario, this situation would have exceeded it by far. We were living out Ephesians 3:20, “[God] is able to do immeasurably more than all we ask or imagine, according to his power that is at work within us.”

And remember that rent that was half-price for the first three months? It was three months to the day when Steve started in his new position. Who knew? God did. We often experienced God’s provision and protection through the twists and turns of uncertainty. Sometimes God doesn’t meet our expectations because he wants to exceed them.

I don’t know what you’re going through right now. 2020 has certainly been a difficult year for all of us. But rest assured, God is working for your greater good. When we give up our need to know all the details, we can have a holy confidence that is independent of our circumstances.

God, I’ll be honest, I’m glad 2020 is coming to a close. And even though I don’t know what’s coming in 2021, I trust that You have a perfect plan. In a world of uncertainties, I and thankful that Your steadfast love never changes. In Jesus’ Name, Amen.

What is one thing you are praying for as 2020 comes to a close? 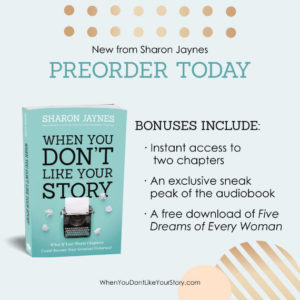 Everyone likes a good story, but not everyone likes their own story. Let 2021 be the year that you turn your worst chapters into your greatest victories. My new book, When You Don’t Like Your Story: What if Your Worst Chapters Could Become Your Greatest Victories will be available January 26. Pre-order your copy by January 25 and receive bonus gifts with your purchase.