Hi Friends. I’m writing over at Proverbs 31 Ministries today. I thought you might like to see what I had to say. Don’t miss the free printable at the end.

I sat in the darkened theater with a friend waiting for the movie to begin. Preview after preview tried to entice viewers to return.

And then it happened. The scene showed a sneak peek of a married woman falling under the spell of very handsome “other man.” And right before the starlet leaned in for the kiss, my friend yelled out, “Don’t do it!” The words came from her mouth before she could stop them and ricocheted around the theater for all to hear.

Wide-eyed with embarrassment, Carla (not her real name) put her hand over her mouth and slid down in her seat in a puddle of shame.

Two years earlier, Carla leaned in for the kiss.

She took the one step, followed by another step, followed by another, until flirtation became a full-blown affair. She lost her husband, her home and (sadly) many of her friends. The involuntary reflex of warning that sprang from her mouth at the theater was the overflow of the pain in her heart. Carla was living the devastation of yielding to temptation … of leaning in for the kiss … and it broke my heart.

I love Carla. She’s still my friend and always will be. And here’s her advice for anyone facing similar temptation: Don’t do it. It’s not worth it.

Sexual sin is not something we talk about much while sitting around sharing lattes with our Christian girlfriends. But the temptation is real, rampant and always right around the corner with a crooked finger, beckoning us to follow.

As a mom wiping snotty noses or as a wife loading smelly laundry, it’s easy to silently wonder if we’ve “still got it.” Or maybe as a single woman, you’ve wondered if God will ever bring Mr. Right. Then there’s that’s slightly flirtatious coworker, a seemingly innocent e-mail from an old boyfriend, a “should-be-declined” invitation on Facebook or a spine-tingling smile from a married neighbor. Everything in you says run the other way, but … then we slowly begin to rationalize our choices.

The apostle Paul wrote: “Flee from sexual immorality … Do you not know that your bodies are temples of the Holy Spirit, who is in you, whom you have received from God? You are not your own; you were bought at a price. Therefore honor God with your bodies” (1 Corinthians 6:18a, 19-20).

We are to honor God with our bodies because as believers, the Holy Spirit (one part of the Trinity) lives inside us.

Jesus went as far as to say, “If your eye causes you to stumble, pluck it out …” (Matthew 18:9, NASB). Now I’m not suggesting we literally pluck our eyes out. But, we can flee temptation when we hit the delete button, decline the Facebook invitation, turn the other way or even change jobs.

I know this devotion is not for everybody. But if one person out of the million who receive these devotions every day … just one woman … will turn away from the temptation knocking on her door, then it’s worth it.

Oh, and one more thing: God is crazy in love with you today!

Dear God, make me alert to the devil’s schemes today. Help me see when and where he is tempting me to sin sexually against You. Give me strength to flee temptation and run straight into Your arms. I cannot do this on my own. I need the power of Your Holy Spirit to empower me to do what’s right and good in Your sight. Thank You for being all that I need. In Jesus’ Name, Amen. 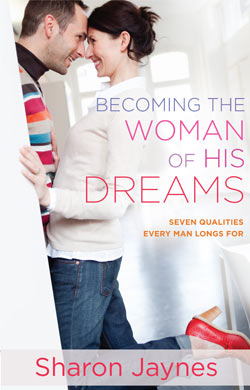 If you’d like a little “wow!” back in your marriage, let seven simple secrets from Sharon Jaynes’ book, Becoming the Woman of His Dreams: Seven Qualities Every Man Longs For, help you get there. Sharon interviewed hundreds of men to find out exactly what they’re longing for, and many of their quotes are in the book. You might be surprised! The biblical wisdom and honest stories of both men and women will inspire you to become the wife your husband longs for. Also includes a Bible study guide.